How I Have Found My Little Blue Rocky Diamond Blue Heart and Why I Like It.

Today I would like to tell you about little blue flower I have in my garden since the summer of  2015. Its name is  Rocky Diamond – Blue Heart.

When I have found it in one of the local nurseries last year, I was immediately drawn to this plant and impressed by its beauty. It has beautiful, bell-shaped flowers in intense, dark sky-blue colour.  I think I also liked it so much because it looked very similar to beautiful, wild flowers I remember from my hikes in high Tatra mountains. Later, after some research, I have discovered that my first impression about it was quite right and it is often found in cool mountains areas.

How it Looks and Natural Habitat.

I believe, my Rocky Diamond-Blue Heart belongs to a species called Gentiana scabra (from the so called true blue Gentians (Gentiana), which belong to a Gentian  (Gentianaceae) family of plants.  It most likely came form either Japan or China. In its natural environment this plant is found growing in the mountains up to 1500 or even 1700 meters and can also bloom quite late into the autumn season when often other flowers are already gone.

This species is found worldwide, including other parts of Asia, Europe,  Americas,  northern Africa and in the eastern parts of Australia preferring climates with cool summers. It is low-growing, forming a creeping mound and it has pretty big up-facing trumpet flowers, which last for many weeks. It can reach 20-40 cm, but mine so far is not higher than about 15-20 cm. It has straight, thin stalks of a dark green, elongated leaves.

When researching this plant, I noticed that other plants in Gentiana Scarba species can come in different colours like for example “Zuki-rindo“, which looks very similar to Rocky Diamond, but is pink-magenta.

How to Cultivate Gentiana Scarba.

I have found out that this plants has special soil and other requirements to grow well.  It likes quite fertile and an acid soil, which also must be well drained, but moist.  It likes good lighting, but since it doesn’t like to be too hot, it is best to keep it away from the hottest part of your garden.  It is perfectly suited for rock, alpine style gardens since it likes growing between rocks and stones. It could be also used in front of flower beds as an edging plant in cooler parts of the garden. To make sure it has enough nutrients, it is good to occasionally water it with some liquid fertilizer, keep and eye on its soil and take care it never gets totally dry. I have fertilized my Rocky-Diamond Blue Heart this year with some regular flower fertilizer and bone meal.

I have planted it in semi-shade and it gets about 4-5 hours of sun since this part of the garden is facing west and there is also some shade coming from fences and nearby tree.

As advised, I have added some acidic soil and peat moss when I was planting it since the soil in my garden is heavy clay. I have also surrounded it with some rocks, at this time following more my intuition that the real knowledge about this plant I had then. It seems to like it and so far it grows well. I hope it will spread more the next year. I was considering moving it to another spot in my garden where there is some more sun, but when doing research about it, I have found out it doesn’t like to have its roots disturbed.  Perhaps in the future I will try to grow it from seeds or buy another plant like that and plant it in a different part of my garden.

Some sources say it blooms from May to November, other say it starts blooming in the middle of the summer till late fall. Because in my garden it grows in pretty shady spot, and since this summer was the hottest on record in this area, my Rocky Diamond started blooming very late in the season. I have almost lost hope it will bloom this year, but it finally made flower buds, when all other flowers, except some roses, have already stopped blooming. It was well after the first frost in our area, which this year was about October 9th.

I think, since it originated in cool, mountain areas, it prefers cooler temperatures and it is pretty resistant to frost.  Yesterday I took some pictures of it when it was still blooming covered with some snow and you can see one of them in this post. I think it is quite an amazing plant, which brings me a lot of joy during this time of the year, where no other flowers are blooming in my garden (I am in zone 5b).

As I have already mentioned Gentiana scarba – Rocky Diamond – Blue Heart belongs to a much bigger group of plant called Gentians and they are  mostly know as growing in the Alps and Rocky Mountains, but in fact they are found in various parts of the world, except the Antarctic. They live in habitats from deserts, through prairies, tundra and even in rainforest and range from small annual herbs to shrubs and some even grow as large trees. Gentians have flowers in various colours, often blue, but some bloom in purple, pink, red or yellow.

The Gentian family contains 87 genera and more than 1600 species.

Some gentians have medicinal properties and were used against malaria, as bitter digestive tonic, in weight-lost and skin care products. In the Alps, one species of gentian flower is often used as decorative motive in art and a variety of souvenirs.  In the wild, some gentians are endangered and because of that, they are on protected species lists.

What Experience Do You Have with Gentiana Scabra Species?

Please share your experience with me, so we can all learn more about this beautiful, amazing flowers.

In the gallery below you will be able to see bigger size pictures from this article.

Our garden in the middle of December 2016, already covered in snow. There was some more snow over the weekend and my little “Rocky Diamond – Blue Heart” is still blooming.

Ebb Tide rose in my garden the first year I have planted it.

Othello Rose from my garden.

Eden rose, which I purchased in spring of 2016. It is how it looked pretty shortly after I have planted it. Then it stopped flowering for a while concentrating on making roots and growing much bigger.

Othello rose – one of the first roses I started to grow in our garden in 2015.

A beautiful orange-yellow rose blooming in front of the terrace. I don’t know what is its name. 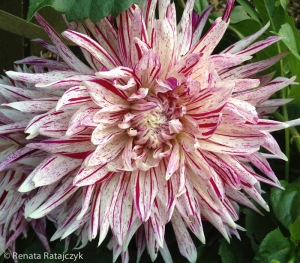 One of our dahlias blooming in September. 2017.

Poseidon Rose – also called Novalis. Here is how it looked shortly after I have purchased it in the Summer 2016. 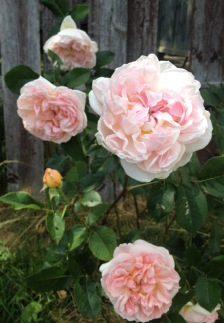 William Morris rose blooming in my garden. They have delicate smell and the flowers are pastel shades of pink and peach colour. It is one of the first roses I started to grow in my garden. 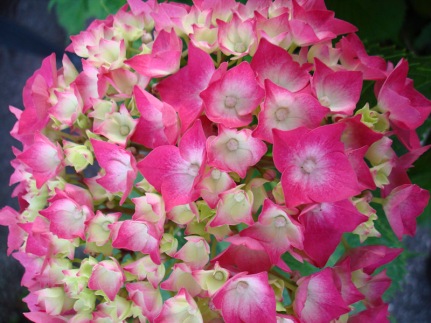 A beautiful pink hydrangea. There were many hydrangeas of various colours blooming at this time beside houses in the Lake Garda area and many other places in Northern Italy. Also I have noticed many hydrangeas blooming in the close by Lugano in Switzerland when I have visited it then in June.

Memorial Day rose in the first year I have purchased it (summer 2015). It keeps changing the look of the flowers. It is so far one of the most reliable roses in my garden – it blooms practically almost all the time till winter. At the moment I consider it as a queen of my Rose Garden. 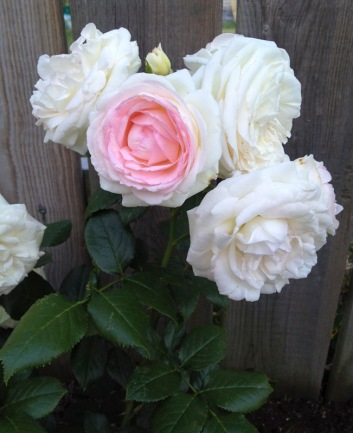 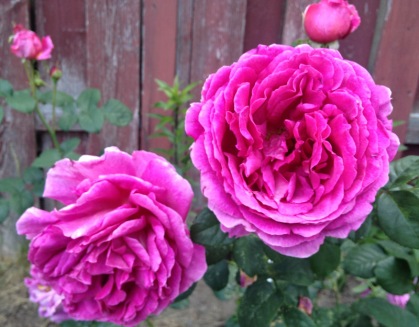 Othello rose blooming in my garden in 2016. It has big flowers and strong, beautiful rose smell. The flowers usually do not last for too long, but are worth waiting for.

Othello roses from my garden before they fully opened, 2016.

Memorial Day rose in the second year since I have it in my garden. It keeps growing and blooming all the time from spring till winter. I highly recommend it as a very reliable rose. 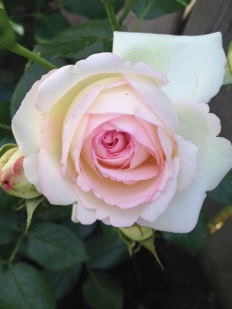 Eden Rose in my garden. 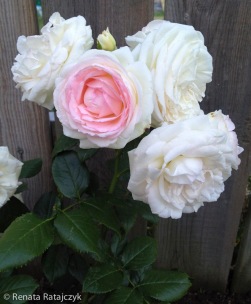 Eden rose growing in our garden, 2016. This picture was taken at the beginning of July, 2016, in about 5 weeks since I have planted it there. Here the flowers look beautiful and already very much as Eden rose is supposed to look.

Abbortsford Rose – the first rose of this kind I have purchased . Now I have two of them. 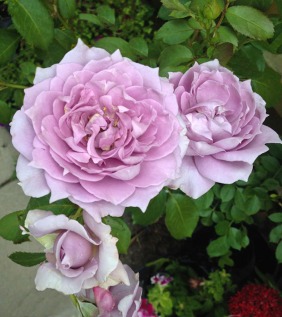 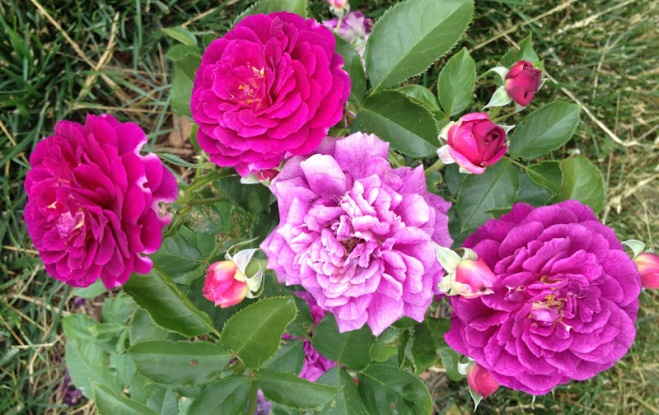